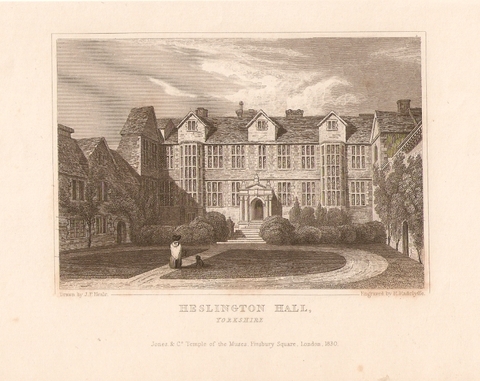 About a mile to the east of the Main street of Fulford & Fishergate, across the Low Moor and Tilmire, the names indicating the nature of the terrain, lies the village of Heslington on the south side of Siward’s How, which is the first hill of over 100 feet high east of the River Ouse.

There is evidence of an Iron Age settlement close to the line of springs on Kimberlow Hill and of a Roman dwelling on the same south facing slope, which was close to the Roman Road from York to Stamford Bridge.

In medieval times Heslington village became established as an agricultural settlement and in 1578 the Hall was built by Thomas Eymes Esq., being much enlarged by Mr Yarburgh Esq in 1854.  His descendents became the Lords Deramore and a windmill was build on the high ground of the glacial moraine east of Siward's How.

The Hall has twice been requisitioned, first about 1580 to be used as an overspill prison by the High Commissioners seeking Roman Catholic priests and again on the outbreaks of World War II as headquarters for 4 Group, Bomber Command of the Royal Air Force. 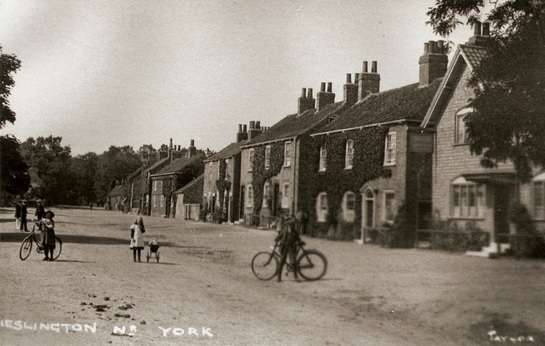 Siward’s How proved a convenient high point from which to shoot cannon at the City during the siege of York in 1644 and how holds a 1 million gallon water tower, disguised as a medieval castle at the insistence of the Fine Arts Commission. At the time it was erected it was the largest elevated reservoir in the country.

In 1855 the village pond was filled in.  It is now a small green by the mini-roundabout on Main Street.

St Paul's church was first built around 1150.  It was rebuilt in 1858 and the only element of the medieval church that remain are the two bells, cast in 1388.  The church was extensively re-modelled and extended in the 1970s, to create a large open interior, designed by Ronald Sims.  It now serves as a 'local ecumenical partnership' between the Church of England and the Methodist Church.  The old Methodist Chapel has been converted into a village meeting room.

​The school was built in 1856 to replace the 1795 one across the road which had been outgrown, but that building has now also been outgrown and replaced.  In the late 19th Century, there were 8 active farms in Main Street alone as well as a Post Office, the 2 pubs and 2 blacksmiths.  The population of the village in 1881 was 477 and by 2001 it had risen to 506.
The last areas of medieval open fields were finally enclosed in 1857.  For many centuries, probably since the time of Domesday, the township had a complicated division of lands between the parish of St Lawrence and the village church of St Paul, (see map HERE) but this was resolved in the allocation of fields and commons, as shown on this beautiful map (HERE) held in the Church Archives at the Borthwick Institute of the University of York. 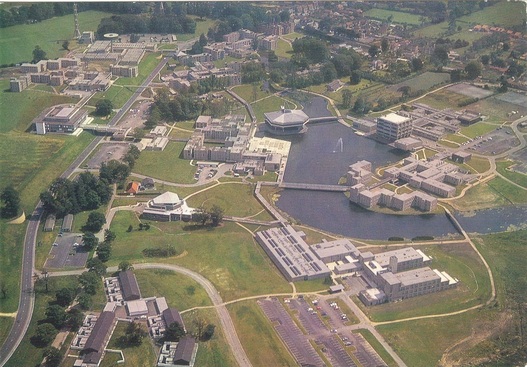 Early aerial view of the University looking SE
In 1954 the Hall, lake and 18 acres were sold to Rowntree Social Trust for £10,000, the first sale of the Hall in over 350 years. Plans for a Folk Park did not succeed and in 1962 the Hall, with a further 137 acres, was given for the founding of the University of York. The land was all still in the East Riding of Yorkshire.  The University accepted its first students in 1963.

Since 2000 the University has invested over £500 million in expansion; the Main Street has 2 banks, a Post Office, and 2 pubs.  Also a sandwich shop, a hairdresser and a student accommodation-letting agent.  There are about 15,000 students and 5,000 staff. This has been something of a culture shock to a village of 750 local residents, which did not get its first electric streetlights till 1954.
​
A hoard of c.2,800 mid-late 4th Century bronze Roman coins was found in March 1966 during the construction of College Street, Alcuin College.  For further information read the report of our May 2016 meeting.

For more information about Heslington, read these pages from the Victoria County History HERE

Do you have any photos/postcards of this area you'd like to share? Let us know and we can manage scanning and uploading them for you.