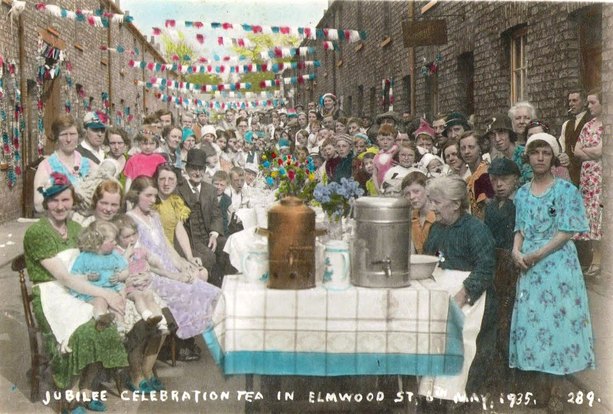 This wonderful  hand-tinted photo of the 6th May 1935 street party in Elmwood Street to celebrate the Silver Jubilee of King George V, has been passed to us by former resident, Pat Bowness.
'My Gran Mary Barson is front left in the green dress I think it must be my Auntie Ann on her knee as it is too young to be my mother.'
Thanks Pat!

Can you spot anyone you know?
Please tell us and we'll add it to this page.​


Tim Hawcroft has written with a lovely story:
I believe the two girls front left are in purple dress my auntie Margaret Parkes and in the mustard dress my mum Noreen Parkes both of No. 9.  My grandad Harry Parkes was from Dublin and he met his wife to be Rose O Donnell when visiting his mortally injured brother at the military hospital off Fulford Road (opposite the Barracks, but now demolished).
They were potatoes famine Irish and living at No. 9 and passer-by suggested they would be ok with putting up Irish people for the night. Grandad knocked the widow and Rose O'Donnell answered the door, saw a good looking young lad and the rest is history.
The guy in the bowler hat is Mr Kirby from next door.  They lived halfway down the street where the houses had little front gardens and backed onto stables. Much fun here as a child.
I was born in Elmwood Street so it’s got great memories for me, growing up with a loving family and a full of adventures.
Strange we never did see poverty only generosity and nothing but praise for England who had given us all our safe haven.
Sadly not always the case today. 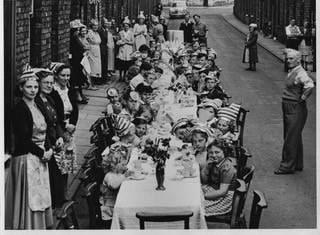 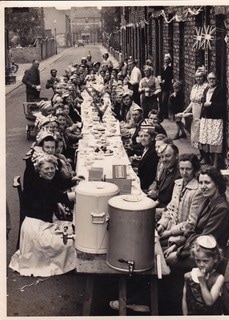 These two pictures have been given to us by Alec Aydon, of 44 Elmwood St, who has identified the following people:

Left Photo - lady on left third, Brian Smiths Mum. Chap with check shirt end of table is Herbert Benson my grand dad. Girl right front Sandra Aydon my sister. 6th lady standing on left is Lilly Benson my Grandma.  The man next to my grandma is Bill Barson, second lady to his right is Mary Barson.  Mr Brown is the man standing in the road with his hands on his hips.
​
Right Photo -  First lady standing on the right is Nelli Bradley.  Second lady is Lilly Benson, my grandma.  On the extreme left near top of photograph is Charlie Smith looking out of his shop.  Just behind him are bombed-out houses, also visible beyond lamp post is the second area of bombed out houses.

​The shop on Fishergate Rd visible at bottom of street was a fruit shop.  To its left was Woolgroves bread shop.  The lamp post on the left was our cricket stumps for many games.  The lady at the front left squaring Betty Benson is my Mum.  The man leaning back near the man with the teapot is Lancelot Aydon, Alec's Dad.

​Do you have any photos of this area?  Please let us know. 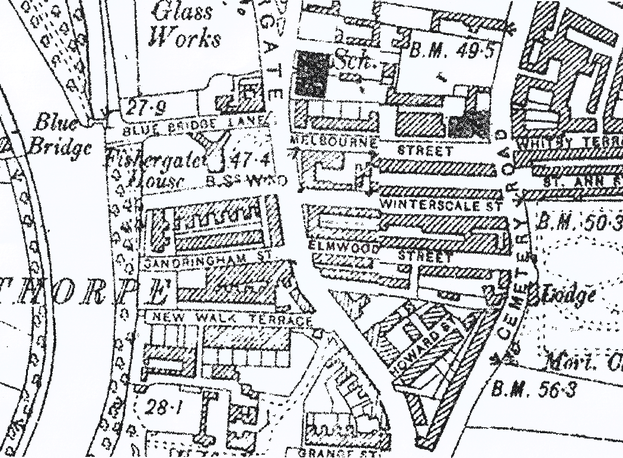 1909 OS map of York showing the Elmwood and Winterscale Street Area of Fishergate
​​Elmwood Street and Winterscale Street was a thriving working class community, built in the late 19th century opposite Fishergate shops on the site of the former Backhouse Nursery.
​John and Liz Morrell’s father had a bicycle shop in the parade of shops, where Mac’s Chinese takeaway is today, next door to Alligator, where the steel meat-hanging rail of the former butcher’s shop can still be seen - now with coloured candles hanging from it!
The Bolland family lived in a number of houses in Elmwood Street.  Alf, George and Herbert became career soldiers and later served in WW1, joined by their younger brother Percy.  All four survived the disastrous Dardanelles campaign and Alf was awarded the Military Cross when serving in the Royal Medical Corps in France.
More details below have been taken from a newspaper article given to FFH by Alf Bolland's grandson, Brian Smith, a copy of which can be read here.
Elmwood Street and the houses on the south side of Winterscale Street were considered by the City Council to be sub-standard and were demolished in the 1970's to make way for St George’s Catholic School.
The school was originally near the Roman Catholic Church in Margaret Street, off Walmgate, but was lacking most modern facilities needed for a modern school.
The new St George’s School in Fishergate opened on 17th September 1977, on the feast day of St Vincent de Paul.  Sisters of Charity of St Vincent de Paul taught at this school and its predecessor until the retirement of Sister Mary in 1985.
The Sisters lived in the large house in Fishergate opposite Fewster Way (now converted into flats) which they acquired in 1890.  In addition to teaching, the nuns undertook social work and ran evening classes and clubs for girls and boys.
In 1902 a wing was added for a day nursery for the children of working mothers.
The Society of St Vincent de Paul was founded in 1833 by a student, Fredric Ozanam and some companions, and was 'dedicated to alleviating all forms of poverty through personal contact and friendship regardless of race, creed or ideology.'
(Thanks to Van Wilson for this information, taken from her excellent book on the history of Fishergate 'Beyond the Postern Gate')

Alf Bolland was a tram driver and played for Tramways Football Club.  He lived at 54 Elmwood Street with his wife and two children.  The second son of T Bolland of Bournemouth, Alf joined the army in 1901 and served in China for three and a half years and during the South African war, and as an Orderly at Netley Hospital.  In 1908 he was posted to York and left the Army a year later, serving in the reserves for a further four years.  He re-joined the army in 1914 and was sent to Galipoli the following July, where he was promoted to Staff Sergeant and then Sergeant Major.  After the Dardanelles campaign he was sent to Egypt and later to Belgium where he was attached to the Welsh Division and was awarded the Military Cross for 'devotion to duty and coolness under enemy fire for a week'. 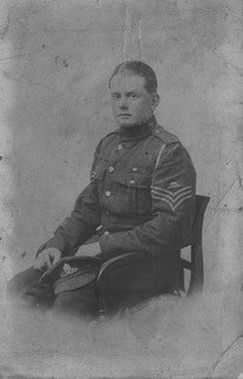 ​Alf's eldest brother, George Bolland, was also a career soldier, serving for 19 years, 10 of which were in India.  In 1914 he joined the British Expeditionary Force and also served in the Dardanelles, before being discharged after suffering three wounds, but he voluntarily rejoined his regiment and suffering a fourth wound, which led him to be cared for in a hospital in Wales.

Herbert Bolland, another brother, was also a career soldier, serving in the Munster Fusiliers for 14 years.  He was in India with his regiment in 1914, and was drafted with the Indian Expeditionary Force to fight in France.  Like his brothers, he was also sent to Gallipoli and later on the Mediterranean front.

A fourth Brother, Percy Bolland joined the Royal Naval Division when war broke out, aged 23 and was also sent to the Dardanelles and then to France. 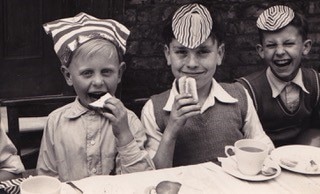 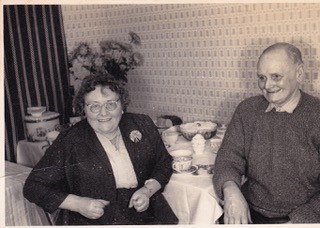 Some more Elmwood Street pictures thanks to Alec Aydon.  Hover your mouse over the photo to read the caption
Pictured below left - 1st St Margaret's Scout Group, with Patrol Leader Alec Aydon of 44 Elmwood Street holding the flag on a St Georges Day parade to the Minster in 1959, or a little later.  Right - Brian and Mike Smith in their garden at 2 Elmwood Street, probably prior to a St George's day Parade in 1958.  Brian says there used to be a workshop/shed where they are standing, but his father tore it down and later converted it into a patch of 'lawn' or flower beds. 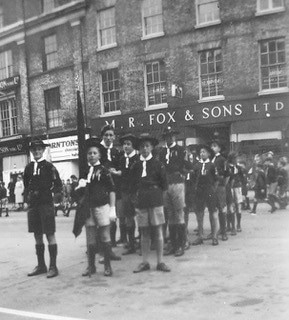 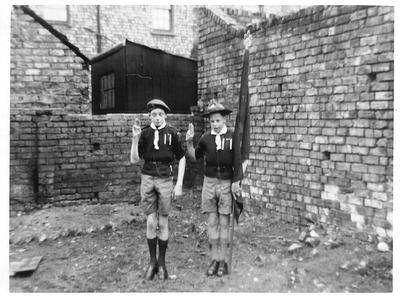 Some more Elmwood Street stories from FFH member and one of its former residents, Liz Morrell:
"There were two 'bombsites' down one side of the street (where we used to have a bonfire on Nov 5) but I don't think Elmwood st was ever hit by bombs in WW2 - I remember seeing some map at the archives once with where bombs landed in York. On the other side of the street were stables that ran quite a long way behind the houses and there were two carriage places, where dad used to keep his car.  These stables were rumoured to be overspill stables for the barracks horses, but they could also have been for some of the residents' horses in the street.  In the 1950s a rag and bone man kept his pony and cart there (Bob Postlethwaite, rumoured to be a retired jockey and he certainly was small) and some children rode the pony.  He later started a little riding school there with a Mr Stedman (?) who used to have a carpet shop down Walmgate, I think.  We used to ride along Fulford Road and then along the river and onto the land at the bottom of St Oswalds Rd.  Can't imagine anyone riding down Fulford Road now...
Given the stables and some of the early residents I think Elmwood street might have been less working class than may be thought, at least initially (or maybe inhabitants were very upwardly mobile!).  Remember the Penty family connection and also the future headmaster of Fishergate School, George Barker's family started out in Elmwood St?  The street had quite a short life if it was built on the old Backhouse nursery area (Dad always reckoned the garden soil was great) and then was demolished in the early 1970s."

Please let us have your memories of growing up in Fishergate, Fulford and Heslington