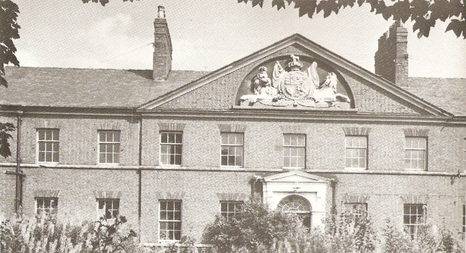 The officers' quarters in the barracks, which were at the far Eastern end.
The Cavalry barracks (not to be confused with the infantry barracks) are now largely gone, with the only visible remainder being the entrance (now bricked up) and the overall ground layout of the site, which is now the headquarters of North Yorkshire Police.

Their history is thought to go back as early as 1720, but the brick buildings that formed the barracks were built in 1795-6 on land purchased in Fulford Field in 1793. This was reported in the Morning Post of the 10th September 1793, "York Barracks are to built upon Fulford Fields near that city; the land was contracted for last week, and the foundation is already begun".

The buildings were designed by the architects James Johnson and John Sanders and cost £25,000.

For a full history see the Victoria County History entry for the barracks.

The earliest mention of troops billeted at the Barracks I can find is in 1795 (Morning Post and Fashionable World (London, England), Monday, October 26, 1795), which reported that "the 3rd or Prince of Wales's Regiment of Dragoon Guards, are arrived at the barracks, near York, from the North, where they have been encamped". In early 1797 the Dumfrieshire Cavalry were stationed at the Barracks. In October 1797 the Fifeshire Fencible Cavalry arrived in York Barracks replacing the Ayrshire Cavalry, who left for the coast of Norfolk. In August 1799 the Sussex Fencible Cavalry arrived - clearly this was a busy place.
​The York Press carried this interesting article by Stephen Lewis about the military presence in York. 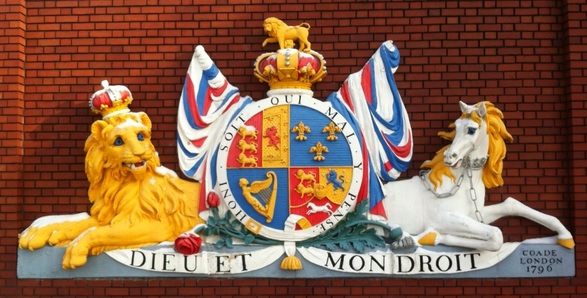 The Coadestone sculpture which fronted the officer's mess now sits in the Imphal barracks.
The barracks are described in 1814 in "The Description of York containing some account of its Antiquities, Public Buildings and particularly the Cathedral" At a short distance, on the Fulford Road, are the Cavalry Barracks, erected at the expense of 25,000l. in the year 1796; since which about 2000l. more have been laid out at different time in additional offices and improvements. These handsome buildings stand in an area of an oblong square, occupying 12 acres of ground, from wall to wall. They are constructed on a plan for containing 3 field officers, 5 captains, 9 subalterns and staff, 4 quartermasters, 240 non-commissioned officers and privates, and 266 horses. The centre building for the officer's apartments is a plan neat structure, with the royal arms, supporters, &c. displayed in large size over the entrance, finely executed at Coade's artificial stone manufactory in London. This artificial stone is a curious composition, having the peculiar property of resisting damp and frost, and consequently of retaining that sharpness in which it excels every kinds of stone sculpture, and even equals marble. In the buildings on each side of the centre are apartments for the non-commissioned officers and privates, with stabling for horses underneath, and a riding school, hospital, suttling-house, &c. adjoining." 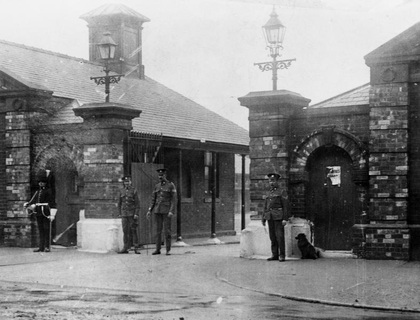 The barracks was used pretty much continuously from 1795 until it was demolished and in 1935 the last horses left the barracks to be replaced by Armoured Car. A variety of mechanised units then used the barracks including the Royal Electrical and Mechanical Engineers and the Royal Army Service Corps.

There was also a chapel in the grounds, dedicated to St. George.

According to map evidence the buildings were still extent in 1960 and were demolished sometime after that.

_1890 map of the barracks - apart from the entrance gates, I don't think a single original building is left. The top half is the police station and the bottom is the Territorial Army headquarters. 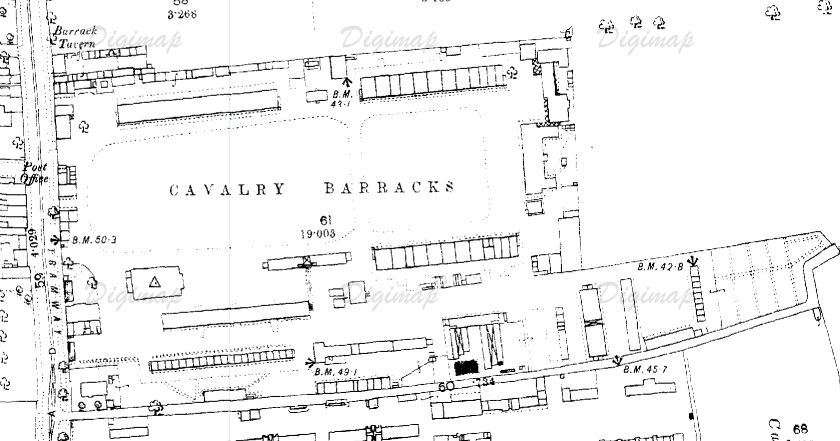 1890 map of the Barracks. Fulford Road is on the left and the Imphal barracks are adjoining on the South where the public road through to Walmgate stray can be seen. Image courtesy of Digimap.