Peter Mott has given us this updated report on the work of a small group of volunteers who are cataloguing Heslington Hoard, 10/12/17  (see below for a more detailed report on the Hoard)

In May 2015, Andrew Woods, Curator of Numismatics (coins, medals and tokens) at the Yorkshire Museum, gave a talk to our Local History Society on the Heslington Hoard: a cache of over 2,800 nummi (small Roman copper-alloy coins) from the mid-4th Century, found at the site of Alcuin College in 1966.

The coins were found in a jar which was not strong enough to hold them, so it must have been buried before they were added - possibly as a sort of wishing well at a shrine. They had been cleaned, identified, and put in a drawer for nearly 50 years. Andrew appealed for volunteers to help catalogue them properly.

Four of us signed up, and from June 2016 Charles Patmore and Dr. Robert Visick took
high-resolution photographs, Barbara Mason weighed, measured and transcribed their inscriptions, and Peter Mott transferred all this information onto Adlib computer programme.

We discovered there were exactly 2,871 coins, of which 1,263 were legal tender, and 1,608 were contemporary counterfeits - identified by errors in the text or images.

The photography is now complete. 1,900 paper records have been created, and 1,650 transcribed onto computer so far. It is hoped that in the New Year, all this will be available on Yorkshire Museum’s website.

Click HERE to see pictures of some coins and the pot
​'The Heslington Hoard of Roman Coins'
A talk by Dr. Andrew Woods,
Curator of Numismatics at the Yorkshire Museum,
at Heslington Church Hall on 21st May 2016 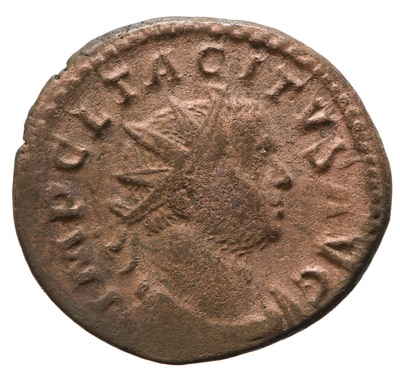 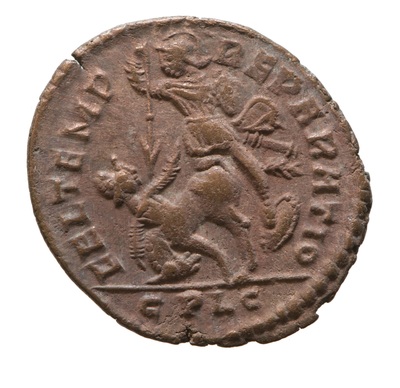 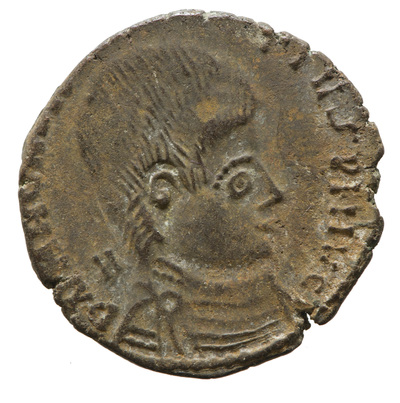 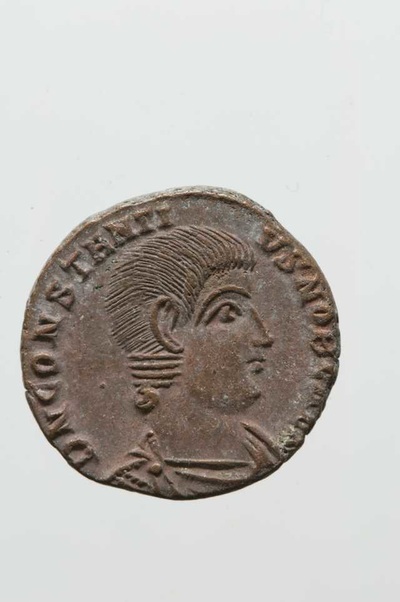 A hoard of c.2,800 mid-late 4th Century bronze Roman coins was found in March 1966 during the construction of College Street, Alcuin College.

Apart from an article in the 1970s (Carsen and Kent, Numismatic Chronicle, 1971 pp.207-225) little further analysis has been done on the coins and the Museum is now looking for volunteers* to help with photographing and cataloguing the hoard.

The talk focussed on four aspects of the hoard:
The coins were found crammed into a fairly small and thin Crambeck 'Grey Ware' jar, with two side handles and decoration, positioned about two metres down in a waterlogged clay cutting.  Its weight would have required more than one person to lift and deposit it, and this, together with the frailty of the jar, indicates it was probably not buried for intended recovery at a later date.

​Click here to see the jar in which the hoard was found.

All the coins are bronze and from the 4th Century, of a style fairly systematic throughout this period despite changes of emperor, featuring the emperor's image and title on the obverse, with more diverse designs and legends on the reverse with a mint mark at the bottom.

The collection is comprised of a mix of original coins (1,211), contemporary copies (1,287) and overstrikes (297), and reflects a number of different emperors, the earliest single coin being from the reign of Tacitus (c. AD 275).

The majority are post-348 AD dating from the reign of Constantine (337-350) and his sons, Constantius II, Constantine II, and later Constans, featuring their images and sometimes their wives.  Coins of this period were usually small with low monetary value and minted in large quantities, reflecting the ongoing turbulent political process of the C4th, and the hoard coins are typical in this respect.

The large circulation and insufficiency of coinage contributed to the number of contemporary copies, overstrikes (where an older currency coin was hammered with a new die in the mint) and 'cut' coins to lower denominational value.

Also interesting is the fact that the hoard contains 80 coins from the period of the usurper Magnentius who succeeded Constans for three years in (AD350) and minted a new coin with the legend FEL TEMP REPARATIO (roughly: Happy days are here again!), showing the use of coinage for propaganda purposes.

The date of the latest coins is from the period of Julian who ruled the western provinces from c.355-360 and became Emperor after the death of his cousin Constantius II in 361.

Again of interest and fairly typical of the period, is the number of different mints involved.  The largest number of coins were minted in Lyons (520) followed by Trier (337) in Germany, then Arles and Amiens.

Only 24 of the 2,000 were minted in Rome and a small number of eastern Empire mints are represented, but most of the coins show Britain's trading place as based in the western Roman empire.

The monetary value of the hoard at the time of burial is difficult to assess but would not have been very great (probably less that one gold coin). This and the way and means of burial suggests it is unlikely to have been one man's wealth secreted away in turbulent political times, but more possibly an offering to the 'gods' by a family or community.

It was a period of rapid political change with insufficient production of new currency leading to copies being accepted in circulation alongside the originals, restrikes and 'cuts'.  As such the hoard would have been an 'affordable' offering at the time.

The Heslington hoard, together with similar coin deposits found around the York area, reflect the wealth and significance of York at the time as a trading centre, as well as the political instability.  Other single but smaller hoards of buried bronze/copper alloy coins have been found at Haxby, Flaxton and a group of three in the Stockton on Forest area.  Most notably in 1891 approx. 6,000 coins were found at Langwith, in a similar Grey Ware vessel to Heslington, again dating from c.348 AD. The Yorkshire Museum retains c.1000 of these, the others having been dispersed.

In summary, the importance and significance of the Heslington hoard when taken together with similar finds in the local area is that:
* If you are interested in helping with photographing and cataloguing the coins please contact Andrew Woods by e-mail: Andrew.Woods@ymt.org.uk. No previous knowledge required, only an interest and attention for detail.