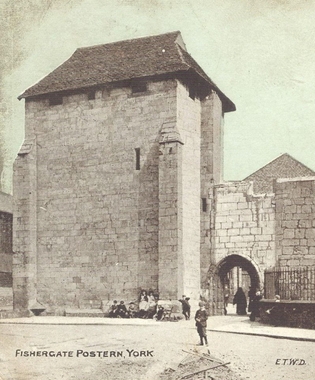 Early 20thC postcard (GH Thomas collection).
The Postern Tower is an impressive rectangular Grade I-listed building, built of fine ashlar masonry. It was built at the point where the city walls meet the river Foss, which had been flooded in 1068 when William the Conqueror built a dam across the river to raise the water level and fill the moat around his new castle.

The flooded river also defended the south eastern side of the city and walls were not built here for another 100 years.  In approx. 1190, a deep ditch was dug from Red Tower to Fishergate and the soil used to build a defensive rampart, topped with a timber palisade.

This is the second Fishergate Postern Tower. The first was not erected before 1345 as Angelo Raine, in his book 'Mediaeval York', states that it is not mentioned in a contract of that date for building this part of the wall.  However, it is likely that a small building was erected to mark the end of the walls and protect the Postern Gate, perhaps a similar looking building to the nearby corner tower.

The earliest definite mention is in a document uncovered by Raine called the ‘Custody of the Walls’ dated 1406, in which three key-keepers are mentioned for Fishergate Postern. This is likely the first tower which is referred to in contemporary sources as the Talkan Tower, named after one Robert de Talkan, a vintner (wine merchant), who was mayor in 1399. This would agree with Raine’s first documented reference to Fishergate Postern in 1406 and suggests that the first Tower dated from the turn of the 15th century. Whether this was a stone or wooden tower is not stated.

The Talkan tower was only a minor gateway into the City as there was a larger entrance just round the corner at Fishergate Bar. However, when Fishergate Bar was destroyed in 1489 another gateway was needed fairly urgently. Hence, on the 10th March 1501/2, the Council decided that “ther shalbe a substanciall posterne maid at Fyschergate, which nowe is closed up, an by reason thereof aswell the stretts and beldyngs within the wallez as without ar clerly decayed and gon down”.

It is then presumed that the Postern was rebuilt in or shortly after 1502, and this probably forms the tower we can see today. 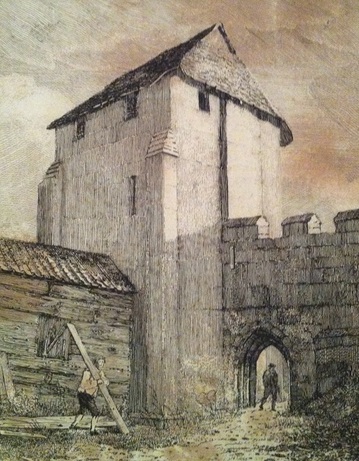 Engraving by Thomas Gent of 1803.
There appears to be no specific mention of the Postern Tower during the Great Siege of York of 1644, although there are records of money being spent repairing the walls in this area, so presumably it was not badly damaged, unlike Walmgate Bar which was pretty much destroyed.

We know the name of the Watchman at the Postern Tower in 1652 from a report of the York Quarter Sessions, which says:  ‘John Wilson presents Rich(ard) Wilson for an assault the 3rd of June last, the said John being then upon his watch at Fishergate Posterne.’
Archivist Laura Yeoman says 'I think we can now be much clearer about what the document is actually saying.  It’s not John Wilson that is the villain here, which was my original thought, it’s Richard (who has effectively been arrested by John whilst he was on duty as watchman).
Unfortunately, there is no evidence as to who Richard Wilson had assaulted (and indeed, whether he was related to John!).  From this we can be clear that John Wilson was on duty when the assault took place, and he presented Richard to the quarter sessions for sentencing in his role as watchmen at the Postern.

The tower does have battlements and was presumably open to the elements when built. There was a look-out tower in one corner which was about 8 feet higher than the rest of the roof, accessed by the continuation of the spiral staircase which can still be seen today. The whole top of the tower was covered by 1610, when it is shown on John Speed's map with a hipped roof.

William Hargrove, in his 1818 'History of York', describes the internal layout of the postern. “On the ground floor is a small apartment, from which a flight of winding stone steps leads to the top – about half way up those stairs is another room, with other conveniences, and at one end of its curious gallery, in the form of the music-gallery of a modern assembly room; it is railed round, and is entered by a door above, from the winding staircase.  Ascending still higher, we come to the top room, the floor of which has evidently been the original roof of the Postern; as it is clearly visible that the present pointed and tiled roof rests on ancient battlements, the vacancies between them having been walled up with bricks.”  Hargrove also has a footnote on the musical gallery and he quote a source that came to him via his father from Sir John Ingilby that states “I am told that concerts of music and dancing used formerly to be in Fishergate Postern and there have been music galleries in the upper rooms”.

From careful reading of this account and examination of the building it would appear that the floor of the second floor was partially removed, leaving a music gallery accessed from the spiral staircase, with the dancers visible below them on the first floor.

Hargrove does not mention the wooden staircase, so this must have been installed later.  We know it was there in 1850, because it is shown on the amazingly detailed first Ordnance Survey map of York.  It may have been installed by William Swann who's son Thomas was born in the Tower on 28th August 1840.  William was a bricklayer and probably kept his materials on the ground floor with his family living in the rooms above.

The first floor room contained the garderobe, which originally discharged directly into the river Foss, which lapped against the north west corner of the tower.

The Postern itself is a relatively small entrance with a pointed archway, the only remaining one of its type left in the city. There is a clear groove inside for the portcullis, which is no longer present. Cooper (1904) notes that "there would also be a strong oak door, the crooks of which remain".

From Drake’s engraving of 1736 (see the banner above), the Foss Bridge crosses the river and the path heads directly into the Postern Tower, although this is not seen in later views where the road which is now Fishergate leads up the side of the walls and runs southwards to form the Fulford Road (see Hargrove 1818).

At the start of the 19th century the postern clearly had no defensive function and was “now inhabited by a poor Freeman of the City” (Hargrove, 1813) and there is a wooden building attached to it in Henry Cave’s engraving, printed in 1803, where he also states that “the structure is a beautiful piece of masonry, and is now occupied by a poor family”.

The walls between the Tower and Fishergate Bar were built in 1345 by Thomas de Staunton, replacing the timber palisade
which had stood on top of the earth ramparts since approx. 1190.  The walls were repaired in 1836 by Mr Joseph Buckle and paid for by subscription, but it is not clear whether Buckle worked on the Tower itself or just the walls. The most recent repairs were in the 1960's when the timber staircase was removed, the roof repaired and strengthened, masonry re-pointed, and new timber installed.

The Friends of York Walls open the Postern Tower to visitors on many weekends and Bank Holidays and you can find out when and see some great internal pictures of the tower on their blog. You can sponser a stone and help them raise funds!

Our Chair, Christopher Rainger gave FFH a presentation to FFH on the history of the walls and Fishergate Postern Tower.  You can download a pdf copy HERE

Cooper, T.P. (1904) York: the story of its walls, bars and castle. Published by Elliot Stock, London. 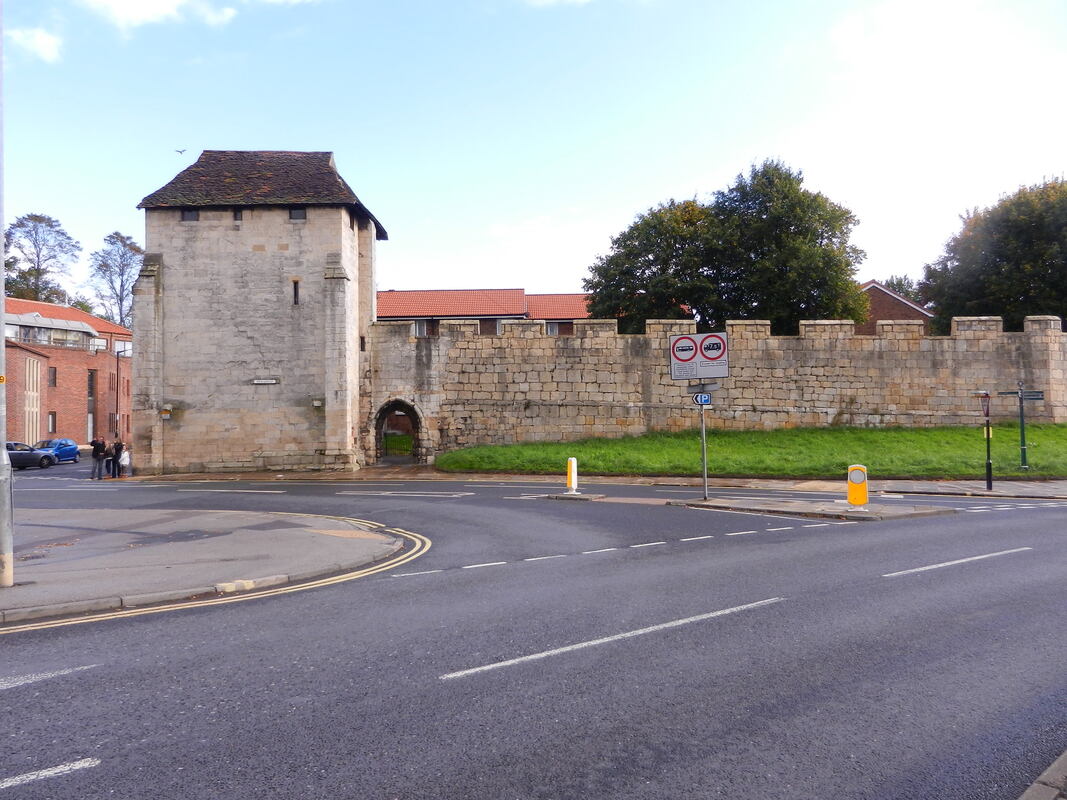 The tower is now flanked on the other side of Picadilly by the Travelodge, built in Yorkstone to a similar height and with a commanding Tower of its own.