Chelmsford Place and the old facade 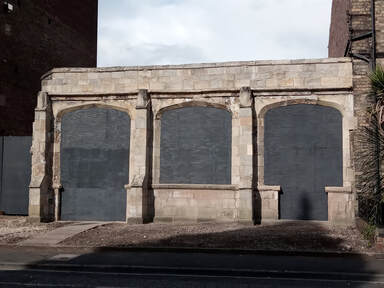 The 3 remaining arches, restored in 2020
Walking down the Fulford Road, a mysterious ruin can be seen on the east side opposite the Priory Hotel. This is not, as thought by many, part of some ancient church or religious building, but is a folly from a Victorian private house.

​However, it is a folly with an interesting history as it is in fact a recycled facade from the Theatre Royal in York which was built in 1834-5 by the architect John Harper and fronted the theatre on St. Leonard's Place. In 1879, according to Pevsner, the new owner W.A. Waddington remodelled the St. Leonard's Place frontage in a Victorian Gothic style and the old facade was removed and re-erected in Chelmsford place, facing onto the Fulford Road. This was in the garden of a house, Manor House, on Chelmsford Place. 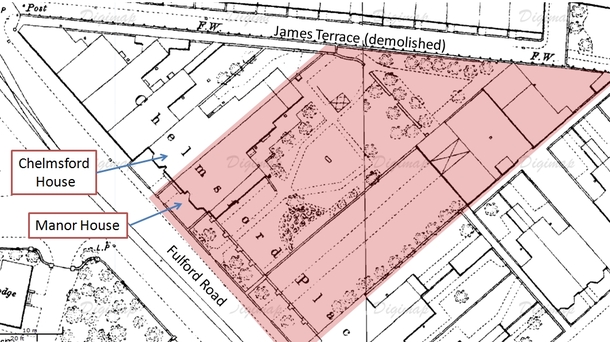 The extent of Manor House in 1890 including the 7 bays of the facade
Chelmsford Place is small section of the Fulford Road and forms an unusual triangular plot which was bordered on the North by James Terrace (since demolished) and on the South by Howard Street. The houses have no special architectural interest, but two stand out as being slightly superior, which were known as Chelmsford House and Manor House in the 19th century (see map), and which are now both combined into the Saxon House Hotel at 71-73 Fulford Road. The southern of the two houses, Manor House, had large gardens that contained the facade (marked in pink on the map and which can also be seen in the banner image above, thanks to Mary Irvine for this postcard). Also note that the 5th bay of the facade is clearly an entrance to a path which leads through the gardens to a building containing a covered passageway.  This was the coachhouse/stables for what is now the Priory Hotel, on the west side of Fulford Road. These buildings still exist and can be seen from the passage on Howard street, but are abandoned. Also, the area of this path has been infilled with a large long building of unknown date, which was most recently used as a day nursery. The rest of Manor house gardens have also gone and been replaced by the modern Elmwood Court flats and the sections of the facade removed during the construction of these flats are now in the back gardens of the Priory hotel over the road.  You can read more about this site in the report by York Archaeology Trust, HERE

Chelmsford House had a series of residents and was often advertised for letting in the local newspapers. It was clearly used by officers at the nearby barracks and in the 1881 census was being lived in by Lieut. Col. Robert Whigham of the 16th Lancers and his family. In 1882 this was the address given by a Major Williamson when he joined the Yorkshire Philosophical Society. When being let in 1886 it was described as having a Drawing roon, Dining room, Kitchen, 4 Bedrooms, Bathroom and Out offices. In the 1891s it was the home of the William Snarr and his family.

Manor House was clearly built at the same time, and in the 1881 census is the home of Fishergate developer and army contractor Ambrose Walker. He moved around a lot in this area and may well have built these houses in the late 1870s but this needs further research. In the 1890s the house was lived in by Edward Carter, a glassware manufacturer.

3 and 4 Chelmsford Place and Chelmford House and Manor House with facade on the right. From Imagine York collection.
The next house along, 4 Chelmsford Place, was for a long time a Chemists shop, originally that of Robert Henry Oakley, who stood for election to the City Council on a number of occasions. He was there from at least 1891 to 1901. In a later picture from the 20th Century it is still a chemists shop. Does anybody remember the shops of Chelmsford Place? Let if know if you do and have any memories.
Article research and written by Dr. Gavin H. Thomas for the FFH in April 2013. Please contact the FFH for permission to reproduce & use this material.