The intaglio was found by Dr. Cecily Spall during the excavation of an Anglian cess pit in the grounds of Fishergate House.

Between July 2000 and July 2002, Field Archaeology Specialists Ltd carried out a series of excavations on two sites along Fishergate, prior to their redevelopment, in association with Mike Griffiths and Associates on behalf of Shepherd Homes and Rank Leisure.  The excavations encountered activity from prehistory to the 20th century.

Fishergate lies away from the historic core of York, but originates as a medieval suburb and has been host to occupation since the Roman period.  Since the Neolithic, a major prehistoric routeway crossed the area which is now York close to the River Ouse. Flint tools were recovered including large cores from manufacture and scraping tools dating from the Neolithic onwards.  Modern Fishergate also follows the line of a major Roman thoroughfare, and, in accordance with Roman tradition, a cemetery was established in the open land outside the city. Cremation and inhumation burials were found, positioned inside a system of field enclosures.

Following the decline of Roman York, little is known of where and how people lived in York. By the 8th century, when the Venerable Bede was writing about the history of England, York, or 'Eoforwic', had become a major royal and religious centre of the kingdom of Deira.  Previous excavations by the York Archaeological Trust have shown that, during this period, a community lived at Fishergate and were engaged in long-distance trade and craft-working.  More evidence was revealed for the nature of this activity in the form of pit groups, and the rich contents of these pits included waste from bone-, metal- and textile-working.  The excavation has helped to understand the extent and layout of the settlement, the activities that went on inside the settlement and the status of the people who lived and worked there.

By the late 10th century, the foundation of the Fishergate suburb was underway, and the establishment of a number of churches in the area was necessary to serve an increasing population. The churches were dedicated to St George, St Helen, St Andrews and All Saints, but are not well-documented: many fell out of use during the medieval period, and their location and histories are lost.  During excavation, a medieval cemetery was found unexpectedly within the grounds of Fishergate House, although it was initially unclear which church it belonged to. The historical sources suggest a number of possibilities.

Medieval activity along Blue Bridge Lane can be more securely associated with a religious house, since it is known to have lain within the precinct of the Gilbertine Priory of St Andrews.  Excavations encountered the industrial heart of the Priory and the remains of the only medieval pottery kiln to be found in York were excavated.  The priory was suppressed during the Dissolution, and fell into disuse.  Much of the land was open orchards and fields, until the 19th century, when Fishergate became a fashionable place to live. 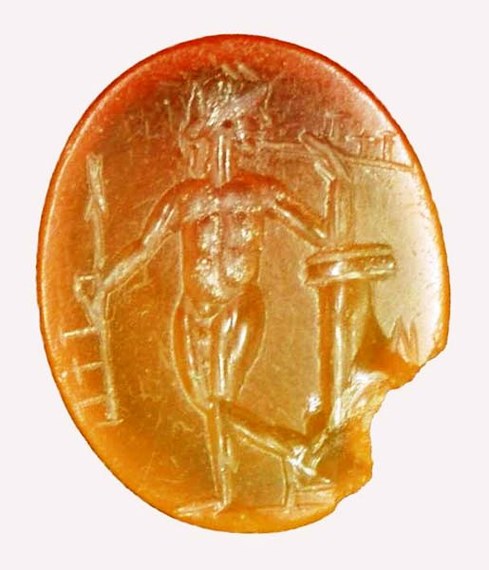 The intaglio is engraved upon a cornelian ringstone, ovoid in shape with flat upper face and sides bevelled inwards (Henig 1978a, 35, fig.1, shape F1) measuring 18 x 1 x 3.5mm. It depicts a youth, standing in a relaxed posture to the front. His head is turned to the right and he plays one of a pair of auloi, holding the instrument in his left hand, resting his left arm upon a low column with a moulded top.  He holds the other aulos in his right hand.  He supports his weight upon his left leg; his right is bent at the knee.
The stops of the auloi are well indicated and a feature of especial interest is that the pipes could clearly be played singly if desired. The gem is in quite good condition but there is a chip on the right side which has removed much of the base of the column.

The cutting is crisp, executed in long, confident strokes and the lithe, well muscled torso is excellently modelled. Stylistically the intaglio can be assigned to the W heel style (Maaskant-Kleibrink 1978, 154-5 and nos 335-40) and is datable to the end of the 1st century BC or possibly very early in the following century.  It is unmatched as a genre work, evidently figuring a flute-player. The only gem from Britain in any way comparable in date, quality, subject and style, a green chalcedony intaglio from Chichester, is very different in mood. Here (Henig 1978a, no. App.108; Henig 1978b) a satyr is depicted, seated on the ground, the auloi lying against a rock in front of him.

The subject has been interpreted as Marsyas, who dared to challenge the god Apollo to a musical contest, lost and was flayed for his presumption. It is possible that this gem, evidently from a late Roman context, had long been an heirloom but it could have come to Britain during the early days of the client kingdom centred on Chichester. The other representation of a satyr playing auloi, a 2nd century red jasper intaglio from the fort of Newstead in Scotland depicts a somewhat diminutive satyr who is standing beneath a tree and playing his instrument (Henig 1978a, no.179).

2.0 CONTEXT
Even outside Britain the intaglio is not easily matched. An intaglio depicting a dancing satyr playing the double-pipes from a cache of intaglios and cameos recovered in the House of Pinarius Cerialis at Pompeii, possibly the stock-in-trade of a dealer in gems, may be noted (Pannuti 1983, no.168) as may the very enthusiastic satyr playing the auloi on a gem from Luni (Sena Chiesa 1978, no.27 or another satyr dancing, with his pair of auloi unused at his feet shown on an intaglio in the Kestner Museum, Hanover (Zazoff 1975, no.863).

Other representations of satyrs, elderly sileni and maenads playing auloi belong in sacro-idyllic contexts with an image often of the fertility deity Priapus in front of them (Brogli 1996, 190-193, nos 205-222). Most of these are of Augustan date.

Does the Fishergate intaglio belong amongst these? Here it may be recalled that it includes a column in its composition. Essentially that feature may have been derived from the sacred column ubiquitous in the sacro-idyllic world of the satyrs but, without any Priapic image upon it and using it as a support for a human figure, the gem cutter has effectively reinterpreted the theme and so created a lively and independent study of his own.

He has conceived the musician not as an uncouth denizen of the wilds but, on the contrary, as an upper-class Greek or Roman youth, stripped and oiled, relaxing in the palaestra after his bath. In fact it belongs within the same milieu as the subject shown on a sardonyx intaglio from North Cerney, Gloucestershire upon which an ephebe partly balances himself upon a herm; this gem is likewise Augustan in date (Trow 1982; Henig 1991, 51
fig. 9). For anyone other than a professional musician, flute playing in Greek and Roman society was an activity strictly associated with leisure (in Latin otium) and one of the later Ptolemies, Ptolemy XII, father of Cleopatra VII, was characterised for his frivolity by his sobriquet Auletes, the ‘Flute-player’.

Although the intaglio can be seen as an important and attractive work of art in its own right, there is its context - or rather contexts - to consider. If it was either churned up in rubbish at Fishergate or brought there by an Anglian craftsman who had found it elsewhere in York or its immediate vicinity, it may originally have graved the signet-ring of an officer in the 1st-century Roman Imperial army or else, just possibly, that of a Briton of Romanising tastes in the Brigantian Client Kingdom. More interesting, perhaps, is what it may have meant in a Middle Anglian context. Throughout the Migration period and beyond Roman gemstones were valued and came to be mounted in brooches, pendants and rings. In addition intaglios and cameos were incorporated in splendid jewelled crosses, reliquaries and book-covers (see Sena Chiesa 2002).

Alas, none of these wonderful objects has survived from a British context, but at least quite a number of Roman gems set in Anglo-Saxon jewellery have been excavated, for example, a recent find is a cornelian intaglio, depicting a satyr set in a gold pendant, which was excavated from a grave in a 7th-century cemetery at Caistor St Edmund (Henig in Penn 2000, 51 fig. 96; see Henig 1978a, chapter 12 for a number of other examples). No doubt part of the interest to those who re-used these relics from Antiquity lay in the beauty of the stones as objects, but other considerations apart from the aesthetic were involved and the images-and the stones themselves-were undoubtedly endowed with magic qualities (Evans 1922).

The interest was widespread even beyond the former Imperial frontiers and Roman gems
are recorded as far north as Hon in Norway and Ribe in Jutland (see Henig and MacGregor 1996, 89). That being so it is possible that the Fishergate gem arrived in Britain not in Roman times but later. In the High Middle Ages gemstones were certainly brought to England from southern Europe and even from the Levant. Whatever its source, it is not at all unlikely that an Anglian craftsman had the intention of reusing the intaglio in an item of contemporary metalwork.

Thanks to Field Archaeology Specialists, Mike Griffiths Associates, Dr. Cecily Spall and Prof. Martin Henig for these articles and image.