​Medieval Fulford
This page is being developed...so look again soon 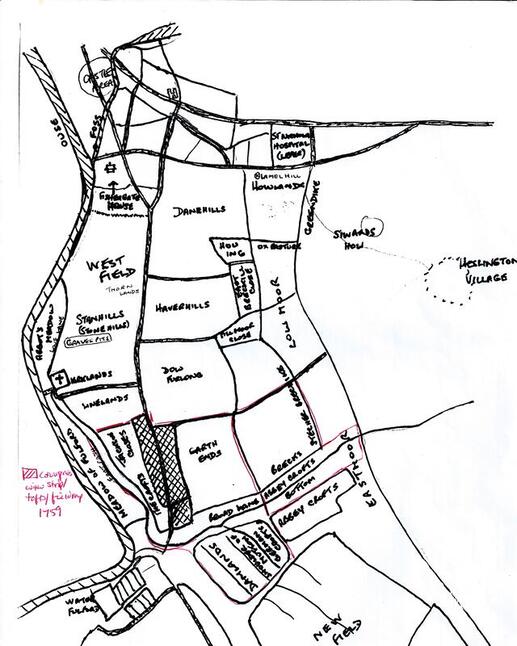 Jenifer Kaner's map of the open fields and commons of Fulford
Early Fulford
Until they were amalgamated in the 18th century, Fulford was two villages; the much larger Gate Fulford (although it was not always called 'Gate' Fulford) and the small village of Water Fulford on the south side of Landing Lane, clustered around the Hall.  The larger village of Fulford extended from Heslington Road in the north, to Pool Bridge on Wheldrake Lane, where farmable land was gradually being reclaimed from waterlogged fenland.

Gate Fulford village retains its classic medieval Toft and Croft linear village layout, with a Main Street lined with houses (Tofts) each with a long thin plot (Croft) ending in a Back Lane.  There was a village green at the southern end of Main Street, with a Pinfold where straying animals were penned until reclaimed by their owners.

The village is unusual in that the church is some 500m away from the houses.  But research by FFH strongly suggests that St Oswald's church is next to the river because this was a crossing point, and also the site of a (probably sacred) well.  There was also a 10th century cross on the site and the present 12th century church is a replacement of an earlier, but undated building.  No evidence has been found near the church to suggest that the village was once situated there, so it is assumed that the village has always straddled the old Roman Road (now the A19).  Also, no firm evidence has yet emerged for the location of a Manor House, or a Tithe Barn.

Research by FFH member, Dr Louise Wheatley has found a large number of people who were land owners and tenants in the Fulford and Fishergate area, and some may have been the Lord of the Manor, or acted for him.
One important man was Siward of Fulford and Dr Wheatley has found a record of 1160-1175 for a grant of a Caracute of land in Fulford.  In the same period Richard, son of Siward witnessed the grant of a Messuage (Manor) in Fulford.  At a later date, Nicholas of Fulford, son of Richard, conveyed to St Mary's Abbey 5 acres of land lying in a new Assart (a piece of land reclaimed from the Fen) abutting the Tilmire.

Before the Norman Conquest, Siward was Earl of Northumberland, whose lands included Fulford, so these Siwards are likely to be descendants of his family.  Siward's base was in Marygate in York, and he founded St Olave's church, which was the mother church of Fulford's St Oswald's.  With the 12th century dates for the grant of a Caracute of land coinciding with the dates for the reconstruction of the church, it seems quite probable that the Siward family were Lords of the Manor at this time and involved in the construction of the church.  A further possible link is that St Olave was a Norwegian warrior-saint, and St Oswald was a revered warrior Northumbrian King. 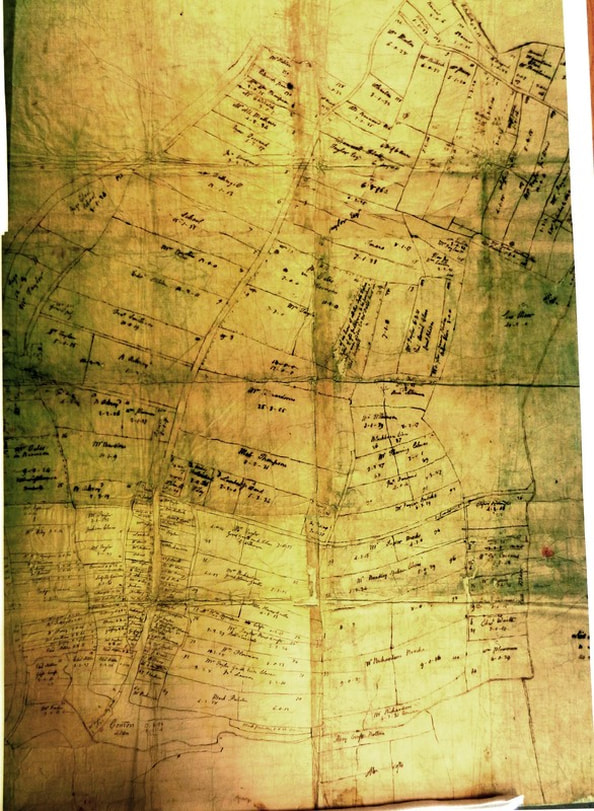 Fulford Enclosure Map of 1759 showing the open fields and commons parcelled into fields and allocated to various owners - (map: York Explore)
The Fulford Enclosures
Although some common land had been enclosed before, particularly through reclamation of wetter areas of the township, the major change was the Enclosure Act of 1756, which was implemented in 1759.

The Fulford Enclosures were managed by a Commissioner, Robert Bewley, who was also Commissioner for the Acomb and Bishopthorpe enclosures.

The Fulford Enclosure map, right, was surveyed and drawn by John Lund.
​It is kept at York Explore and is in two large sheets, one for Fulford village up to Fishergate, the other from Germany Beck south to Pool Bridge.

Another map (see HERE) shows the northern area of Fulford from Fishergate to Heslington Road, and shows windmills on Heslington Hill and at the junction of Fulford and Cemetery Roads.  This ‘Map of Walmgate Stray’ was prepared by John Lund junior in 1772.  It was based on a 1735 survey by George Smith, with some alterations and additions.

Before enclosures, the people of Fulford cultivated unfenced strips of land in the open fields surrounding the village.  They also had grazing rights on the commons or strays.  The enclosed land comprised 307 acres in Fulford Field (between the city and the village), 38 acres in Dam Lands Field (south of the village) and 503 acres of commons or strays, including the Ings (water meadows) between the village and the Ouse.

The enclosures divided up the open fields and part of the commons into new privately owned strips.  These were allocated by the Commissioner to Fulford people, the Lord of the Manor, the Church, and others having claims, including Freeman of the City of York who had grazing rights on the strays.  Out of the 907 acres enclosed, 500 acres were allocated to the Lord of the Manor, John Taylor, another large land owner, Robert Oats, and to City of York Freemen as compensation for loss of grazing rights.  Others received financial compensation for the loss of grazing rights or income from tithes.

New land owners were required to erect fences or hedges to enclose their plots.  The enclosure process also included construction of new roads to access the plots or replace lost trackways.  Major drainage works were also undertaken, for example on the Heslington Tillmire, to convert former water meadows into arable land.
Some owners of the new plots, particularly between the village and the city, began to develop them as nurseries, or sold them on to developers.  For example, the Cavalry barracks was built in 1795 and was initially surrounded by nurseries, and the Grange Estate was developed from amalgamated plots between Fulford Road, New Walk and Alma Terrace.

British History on-line has a very detailed academic study of the ownership and economic history of Fulford, including the enclosures, which you can access HERE