It may seem hard to believe, but Henry VIII rode up Main Street and Fulford Road on his way into York!

On 30th June, 1541, Henry VIII and his wife, Catherine Howard, left London on a Royal Progress and headed north to Yorkshire.  With the king were half his Privy Councillors and a huge entourage of 4-5000 horsemen, soldiers and servants, supported by a vast number of baggage wagons.  His purpose was to stamp his authority on the north, following the successful put-down of the northern rebellion, known as the Pilgrimage of Grace, protesting against his dissolution of the monasteries.  He also hoped to secure a meeting with the Scottish King, James IV, but that didn't materialise.

The King was guaranteed a comfy bed, sumptuous food and plenty of hunting, but those further down the pecking order had to make do with whatever they could find.  Before they set off, the King’s purveyors had stripped London's shops and warehouses of food and other supplies.  Rain beset the Progress in July, so Henry indulged himself at Hatfield in a spectacular hunt, bagging two hundred stags and does, young swans, two boats full of river birds, pike and other fish.

Accommodation was commandeered in castles and large country houses, and huge tented encampments were set up in surrounding fields for the nobles, officials, soldiers, cooks, and the King and Queen’s servants.  Temporary stables were constructed, sometimes in the ruins of monastic churches, which had been dismantled following the dissolution of the monasteries, including St Mary’s Abbey in York. 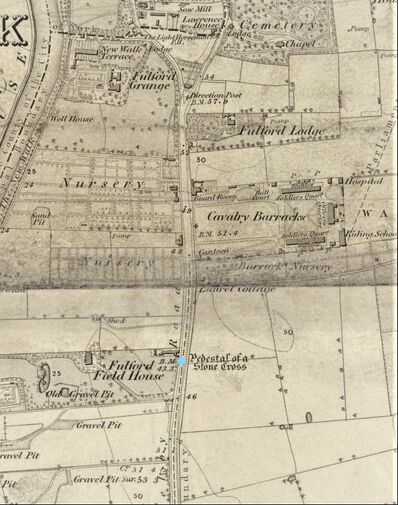 Bad weather continued to cause delays and they didn’t reach Lincoln until 9th August, moving on to Pontefract on 23rd August, then Cawood, where they stayed at the palace of the Archbishop of York.  Henry then travelled to Wressle castle, near the bridge over the river Derwent on 6/7th September, and on to Leconfield castle, near Beverley, on the 8/9th.  Hull had remained loyal to the king during the rebellion and he visited the city on 11/12th September, returning in early October on his way back south from York, when he unseated the recently elected mayor, John Johnson, in favour of Sir John Elland, who was famous for capturing the rebel, John Calkhill.

After his first visit to Hull, he returned to Leconfield on 13/14th September before making his way to York.  It is thought that Henry hoped that King James IV of Scotland would come to meet him in York, so he delayed in East Yorkshire, before finally arriving at York on 16th September.

The Tudor historian and University of Huddersfield Deputy Vice Chancellor, Prof. Tim Thornton, has written that 'the much-delayed entry into York exemplifies the forces at work in this progress, and in particular, Henry's determinedly confrontational attitude.  Within the city and especially among the authorities there, the intention was clearly to promote an image of the city and its loyalism.  There was a search of the city records and particularly cited were examples of visits by Henry VII and Richard III and his queen.  The joiners who worked on the scaffold at Micklegate Bar were given the material from the first visit by Henry VII as a precedent....'The decorations there included the arms of not just the king, but that of the queen, prince and the city itself....  'There were to be speeches at the entry of the king, not simply a submission, and the task of devising them was allocated to Ralph Clayton, clerk. Henry Smith, clerk of St William's chapel on Ouse Bridge, had the responsibility for organising a 'showe of syngyng and other mellody after the best facon as he could devyse'.....'The intended negotiation, reflecting the circumstances of 1541, was taking shape.  The Merchants' Pageant was to be staged on Ouse Bridge; another two were to happen in Coney Street 'with melody'.

However, this royal visit was different to Richard III's, as Henry VIII wanted the city to submit to his authority.  Also, because the king did not follow the usual custom of approaching York through Micklegate, the city lost control of events.  Instead of a carefully choreographed statement of the city's loyalty, the leading citizens found themselves kneeling ignominiously around Fulford Cross.

The Progress approached the city on 16th September 1541, with the king and his entourage on horseback, followed by the mile-long procession of carts, horses and hundreds of people on foot, stretched out along Main Street, Fulford.

Henry was met by the city officials at Fulford Cross, which marked the city boundary. ​(Marked with a blue spot on this 1852 OS map of York. Copyright Scottish National Library)  At that time, Fulford Road was flanked on the east by Walmgate Stray, and West Field on the west.
​
The cross had been erected in 1484 at a stone bridge where a small stream crossed Fulford Road, and marked the boundary agreed  between St Mary’s Abbey and the city to settle a dispute over grazing rights on the Stray.  The base and pillar of the cross can still be seen outside Aldi, next to the bus stop opposite the keep of Imphal Barracks.  If you look carefully, you can see that the road has a dip near Maple Grove, and close to this point, perhaps this is where the stream once flowed.

The greeting party consisted of the Lord Mayor, Robert Hall, the Recorder, 24 Aldermen, and 120 of the ‘most discreet commoners’ of the city, wearing expensive new gowns of fine 'sadde tawny'.  Also in attendance were 60 notables from The Ainsty. On the king's approach the assembly fell to their knees and the Recorder made his fulsome oration of submission and apology;  'Lacking knowledge of God's word and ignorant of their bounden duty, they had heinously offended by the odious offence of traitorous rebellion. The King, having the lives, lands, and goods of these 'wretches' at his pleasure, had charitably and bountifully granted them his pardon. They 'from the bottoms of [their] stomach repentant' promised to spend their all in the royal service.'

The King was handed a paper bearing words to the same effect and presents of cups of 'silver double gilt', that for the king containing £100 in gold and that for the queen £40.
​
After the greeting and submission, the whole party began their unusual progress towards York, probably led by the Earl of Cumberland, whose family claimed the right to carry the city's ceremonial sword (see our report on the Sheriff of York's talk to FFH on 13th April 2019, HERE).  Henry, Catherine and their huge entourage rode, walked and trundled up Fulford Road, branching east into what is now Cemetery Road (a pre-Norman boundary once known as the 'King's Ditch') to enter the city at Walmgate Bar.  The Progress then continued over Foss Bridge along Petergate and eventually arrived at Kings Manor, where the royal party was lavishly entertained at great expense by the city.

After waiting in vain for James to arrive for 9 days, Henry returned to Hampton Court on 24 October.

An overview of the circumstances surrounding the Pilgrimage of Grace and Henry’s visit to York can be found at British History on line website: Tudor York: Religion and Reformation HERE and the 'Tudorplace' website HERE

More details of the Progress can be found at The Anne Boleyn Files: HERE

Text for this article was compiled from the above websites by Christopher Rainger, September 2019