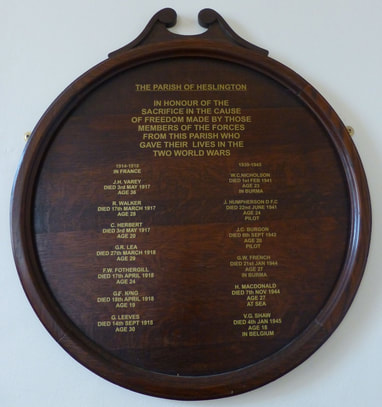 There are 7 men listed on this memorial.

We have now published our biographies, but we have retained these limited initial notes on these men on this webpage.
​The information on families has been compiled by Gavin Thomas, while service records have been taken from Steve Mattock's excellent record of York men who died in the Great War.
​
Frederick William Fothergill

He was born on Barbican road, Fishergate, in 1893. In the 1901 census he was 7 and lived in Heslington with his parents William Fothergill (b. York), a Telegraph Clerk, Post Office who was a widower. He had a sister Gertrude (14) and (twin) brother Allan Giles Fothergill (7). In 1911 he was in service and was a Hallboy working at Norton Conyers, Melmesby, Yorkshire, in the house of Sir Reginald Henry Graham Bart. DL JP.

He was born in Heslington in 1899, the son of James Henry King (b. Essex), a Corn Miller for Messrs Leetham & Sons, York, and his wife Mary Elizabeth. He had an elder brother Herbert Earnest and daughter Elsie. In 1911 they lived in Heslington.

George Leeves was the son of Horace Leeves, a Bricklayer, of Heslington (b. Tonbridge, Kent)and his wife Rachel nee Lazonby (b. Grantham, Lincs). He was born in Heslington in 1888. He married in York at the end of 1915 to either Jane S Coutts (d 1978) or Margaret P Ingleby.
He had an elder brother Horace who was also a Bricklayer (died 1965 at Bell Vue Farm Bossall Yorkshire, probate to William Alan Leeves, farmer), so looks like a family business.

He died on the 11th September 1918 in Flanders. He was a Lance Corporal in the 2nd Battalion (Tyneside Scottish) of the Northumberland Fusiliers (45970 – he had formerly been in the Yorkshire regiment 32745).

A Charles Edwin Herbert was born in York in 1897. Can’t then find the family or confirm what is on the Parish room board. More likely to be Charles Herbert b. Murton, York and lived in Heslington. Died 3rd May 1917 in France & Flanders and was Private in the Prince of Wales’s Own (West Yorkshire Regiment) 2/6th Battalion. 242227. KIA.

He was born in Marylebone, London in 1885. In the 1901 census, when only 15, he is working at Arlington Manor in Chieveley, Berkshire as a Gardener. By 1911 he had moved to Heslington where in the 1911 census he is 25 and is a Foreman Gardener for Lord Deramore lodging with Richard Botterill in Heslington.
​He served in the West Yorkshire Regiment (Prince of Wales's Own), 15th Bn. And died on the 27th March 1918. I can’t trace his parents and see not record of his marriage to Sarah?

He was born in Huntingdon in 1881, the son of George W Varey, a Cattle dealer (b. Huntingdon) and his wife Sarah (b. Brookfield). He has an elder brother Fred.  He married Margaret Hannah Metcalf in 1900. In the 1901 census he is 20 and is a Cattleman on Farm living in Heslington with his wife Margaret Hannah (20 b. Osmotherley). However, she died in 1903.  He remarried to Mary Alice M Imeson in 1905 in York in the 1911 census is now an Ironstone Miner in 18 Graham St, Liverton Mines, Loftus. He has 2 children Annie (5 b. York) and George (2 b. Liverton, Loftus).

He served in the West Yorkshire Regiment (Prince of Wales's Own),  15th Bn (as did GR Lea). He was KIA on the 3rd May 1917. Enlisted in York and commemorated in the King’s Book (from Steve Mattock).

He was the son of William Walker (b. Yarm) and his wife Mary (b. Wheldrake) and he was born in Wheldrake. In the 1901 census he is 12 and lives with his parents at Warren House Heslington where his father is a Farm Manager. He has 3 sisters Louise, Amy and Violet. By 1911 he is 22 and is a Foreman at Naburn Hill Farm (that of Charles Richard Tesseyman).

Gunner 40780, "X" 35th T.M. Bty., Royal Field Artillery. Killed in action 17th March 1917. Commemorated Thiepval Memorial, Somme, France, Pier and Face 1 A and 8 A. Robert Walker was born in Wheldrake and enlisted in York. Commemorated on the St Cuthbert’s Church War Memorial and in The King’s Book (from Steve Mattock).